Pictures
of Art Nouveau with Music 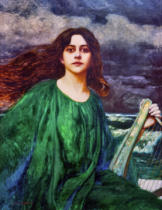 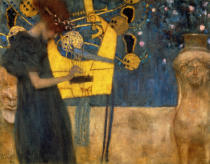 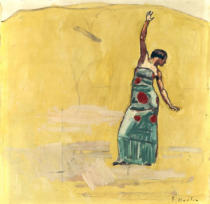 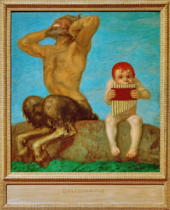 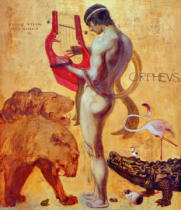 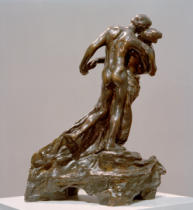 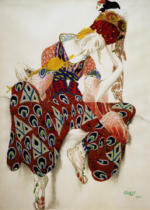 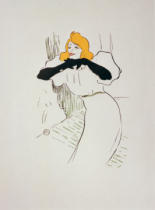 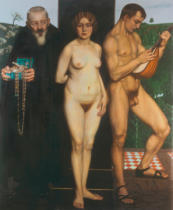 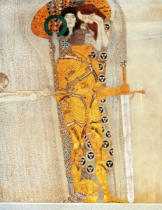 The Knight detail of the Beethoven Frieze
Gustav Klimt 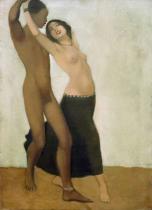 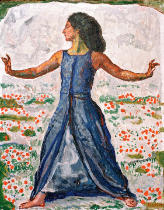 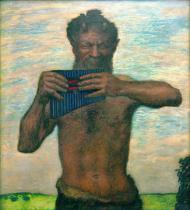 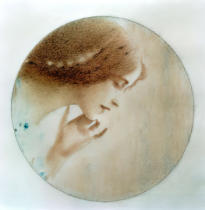 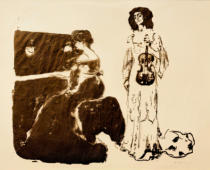 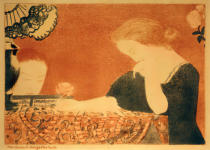 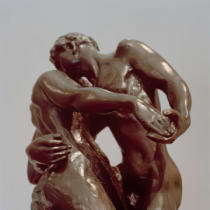 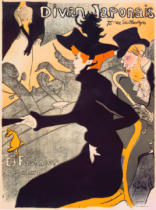 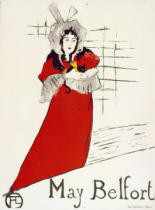 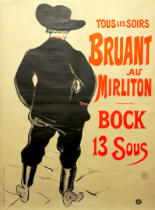 The works of this period, also called modern style, were created in the time between 1890 and 1910 (“Fin de siecle“), they are characterized among other elements by decorative curves and floral ornaments. The Art nouveau answers the industrialization and its machine-made mass products by recalling the arts and craft tradition that is supposed to bring beauty and joy into people's everyday lives.
Music had been a popular motif already in early fine arts when mostly music scenes with religious reference were represented. However, already in ancient times we find secular pictures of music playing people f.e. in Egypt as symbol of courtly refined lifestyle on frescos and tomb walls. Representations of music in Rome and Greece – often as part of mystery scenes – testify the high social reputation of music. The Middle Ages brought forth many representations of music playing angels, secular representations of music can be found in manuscripts of songs respectively Minstrels' manuscripts. The genre paining of the 16th century depicts music scenes realistically, in the baroque period the first portraits of famous composers are created.

Our canvas prints are handmade in our own workshop. Either the canvas print or the art print laminated on a canvas is stretched onto a quality keyless frame. Perfectly wedged and provided with a suspension, the canvas image can be hung directly. Optionally, we also offer each canvas picture framed, i.e. with floater frame. »The Waltz« of Camille Claudel as a canvas image also beautifies your home.

We frame almost every picture. You can choose from many different frames. Passepartouts are just as much a part of your choice as are various options for surface protection. So »The Muse« of Hans Unger becomes a highlight for your living room or bedroom.

Spacefull art from Alfons Maria Mucha. This gives »Music« a whole new look. The wallpapers are printed according to your information in the latex printing process on solid fleece material.