Pictures
of Neoclassicism with Music 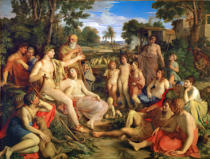 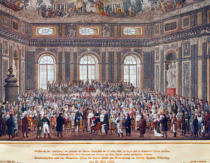 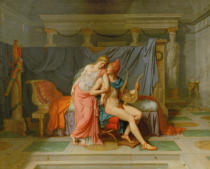 The love of Paris and Helena
Jacques-Louis David 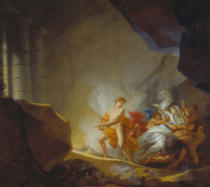 Orpheus and Eurydice in the Underworld
Friedrich Heinrich Füger 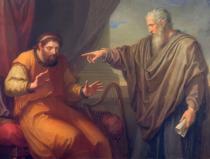 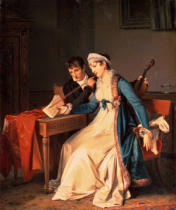 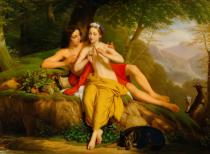 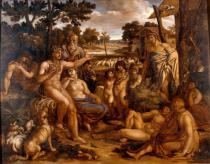 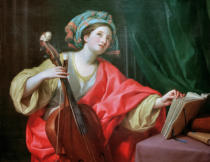 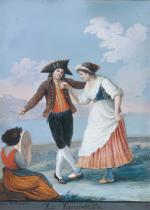 A Couple dancing the Tarantella by the Sea, with a young Girl playing the Tambourine
Alessandro d'Anna

An Italian Family Feasting in the Country
AKG Anonymous

The period of classicism began about the year 1760. Its models are the works of the ancient times and the Italian Renaissance. The aim of classicistic Arts was to create an idealizing beauty by means of measure and harmony. To show the idea of perfect nature was more important than depicting nature itself.
Music had been a popular motif already in early fine arts when mostly music scenes with religious reference were represented. However, already in ancient times we find secular pictures of music playing people f.e. in Egypt as symbol of courtly refined lifestyle on frescos and tomb walls. Representations of music in Rome and Greece – often as part of mystery scenes – testify the high social reputation of music. The Middle Ages brought forth many representations of music playing angels, secular representations of music can be found in manuscripts of songs respectively Minstrels' manuscripts. The genre paining of the 16th century depicts music scenes realistically, in the baroque period the first portraits of famous composers are created.

Our canvas prints are handmade in our own workshop. Either the canvas print or the art print laminated on a canvas is stretched onto a quality keyless frame. Perfectly wedged and provided with a suspension, the canvas image can be hung directly. Optionally, we also offer each canvas picture framed, i.e. with floater frame. »Apollo among the Shepherds« of Christian Gottlieb Schick as a canvas image also beautifies your home.

We frame almost every picture. You can choose from many different frames. Passepartouts are just as much a part of your choice as are various options for surface protection. So »The Creation« of Balthasar Wigand becomes a highlight for your living room or bedroom.

Spacefull art from Jacques-Louis David. This gives »The love of Paris and Helena« a whole new look. The wallpapers are printed according to your information in the latex printing process on solid fleece material.